Jerry’s entry letter from his daughter:
Ever since I was a little girl, Gerard, my dad, shared incredible stories of his time serving in the Navy. From joking around with his fellow sailors to meeting my mother in the Philippines, I’d sit there – wide-eyed and fascinated – as I listened to the incredible adventures he had. 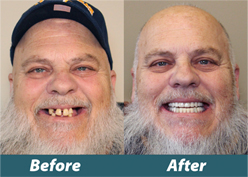 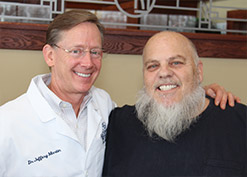 Even when I moved to Texas, I took his letters, the ones he had sent home during his service, with me so I would always have the stories. No matter what situation he found himself in, my dad’s tales always had the same conclusion: He was proud to serve his country, and he was happy to sacrifice whatever he had to if it meant his fellow Americans could have a good life here in the States. And he certainly did sacrifice – my dad left the U.S. Navy a 100% disabled veteran, having given up his physical health for the rest of his life.

I tell you all of this because my dad’s belief of putting others first and asking for nothing in return has held strong over the years, even during hard times. In the last few years alone, I’ve been there as he’s lost both of his parents and his stepfather, suffered through increased pain from his disabilities, and unfortunately, lost most of his teeth. The VA’s policy of tooth extraction rather than preventive care (ie: root canal and crown) has left my dad with so few teeth, he can’t even enjoy his favorite foods anymore. And being from Buffalo, you know we have plenty of delicious foods! Through all of the pain, he stays a positive and faith-driven man, choosing to understand rather than complain. So, I believe that now is my chance to put him first, by submitting him for this contest.

Gerard is kind, funny, and a real character. Above all, he is completely selfless and would give you the shirt off his back. I would love to see him win your Veterans Day Smile Makeover and show him that his community truly does care for veterans. This contest is an incredible gift to Western NY veterans, and I hope you’ll consider my dad! Thank you so much, and God bless.

David’s entry letter from his mother:
David served in the Army National Guard in Camp Stone located in Harat, Afghanistan for Operation Enduring Freedom from 2008 to 2009. He is 90% service connected disabled due to his service overseas. After receiving an honorable discharge from the Army National Guard, David moved to Pennsylvania. 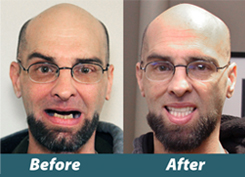 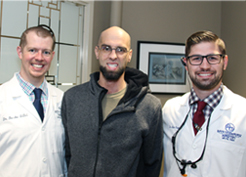 In February 2012, David was badly burned in a grease fire resulting in 3rd degree burns over 30% of his body. He was airlifted to Lehigh Valley Burn Treatment Center where he remained in the ICU for 5 five weeks. During that time David was intubated and put in a medically induced coma while he had grafts done to both arms and hands. After his release, he moved back to Buffalo while he was trying to recover from all that had happened. Shortly after he began to have difficulty breathing and would become short of breath with mild exertion. It was discovered that, due to the fire and intubation, there was damage to his vocal cords and in March 2013 he had surgery at ECMC to repair the damage. He had some complications from this surgery while at ECMC but once he was released he continued to attend classes at ECMC. David was determined to continue taking his classes at ECMC regardless of the obstacles he had from this surgery. He would go to school with his suction machine in tow to assist with issues he had with the trach and although he also was unable to speak as well, he persevered. On May 4th he suffered cardiac arrest. He had no pulse but paramedics were able to revive him. He was without oxygen for about 10 minutes which caused anoxic brain injury. They transported him to Kenmore Mercy Hospital for further treatment and after several weeks in ICU and rehab, David returned back home.

Due to all of these major medical events his teeth suffered, David only has 6 remaining lower Teeth, very decayed, so it is only a matter of time before he will lose them as well. We have approached the VA for dental as he is in desperate need of dental care and implants, however, the VA requires you to be 100% service-connected disabled and David is only 90% service-connected disabled. They will not budge on this requirement so he is unable to get any dental care. David has had two major medical events along with his service-connected problems.

I am writing this letter in the hope that you will consider David as the winner of your 2018 Veteran for dental implants. I am sure you have many candidates that are deserving but it would be wonderful to have him be able to smile again and be able to eat normal foods. It would be a huge boost to his self-esteem as well. David could use a break and a boost in his self-confidence as he has so much to handle over the last few years. Thank you for your consideration.